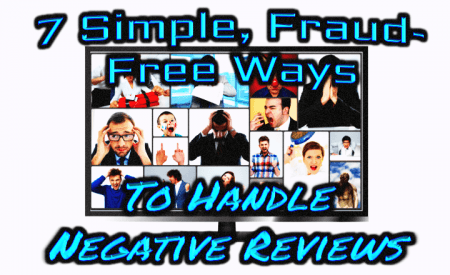 I’ve been lucky, and I have no problem admitting that. To date, I haven’t had a client who, either during or after completion of my representation, decided to burn me by posting a scathing negative review online. While I may have had a few clients that might have been inclined, I’ve done everything I could to manage the situation before it came to hostile words being shared to the world online.

Like I said, that doesn’t necessarily make me good, it makes me lucky. Many other lawyers, unfortunately, haven’t been so lucky. I’m not talking about those lawyers who treated their clients casually, failed to return phone calls, or truly caused their clients harm through negative actions or omissions. They deserve all the ink they get. I’m talking about lawyers who, despite their best efforts, just couldn’t deliver what the client wanted or expected.

Whether you deserve the online tongue-lashing you ended up getting or not, once it’s posted, you need to do something about it. And when I say “something,” I most certainly mean something OTHER than what these lawyers are accused of doing…

You Should Already Know that Committing Fraud is Wrong, But Just So We’re Clear…

If you haven’t heard the story, two lawyers have been engaging in “online reputation management” through some allegedly sketchy, unethical, and illegal means. According to a lawsuit filed in US District Court for the Northern District of California, the lawyers would attempt to have negative reviews that had been posted on various sites online taken down. When a site refused, the lawyers would file a defamation lawsuit – either on behalf of the subject of the negative review, or not (sometimes it was a random, unaffiliated entity, apparently) – against a defendant “who most certainly was not the party that published [the review.]”

The lawsuit would immediately settle, with the parties stipulating to injunctive relief – an order to search index sites to de-index the negative reviews. Once the order was sent to Google, Yahoo, Bing, etc., the negative review would, in effect, disappear from the internet.

Just in case you’re unclear, if true, these lawyers are committing fraud. So are any of the entities, straw men, or dupes who sign on with them to run this scheme. And they’re using state and federal courts to do so.

There’s no question that negative reviews that your clients and former clients post online can be a real pain, and do actual damage to the reputation you’ve worked hard to build. However, I would certainly hope that your first steps when it comes to dealing with those reviews don’t include defrauding the U.S. judicial system. When confronting negative reviews, you need to first take a DEEP BREATH! Relax, figure out what the reviewer is really saying (or trying to say), and instead of turning to criminal behavior, try one of these:

7 Simple Ways to Respond to Negative Reviews Other Than Committing Fraud:

This should probably be the default response to negative reviews, but only for the minute it takes you to do some deep breathing.

Unfortunately, I’ve seen a few too many articles (and ethics opinions) that suggest it’s a good idea to simply ignore negative reviews. Unfortunately, for the vast majority of negative reviews posted, the “just ignore it” advice completely ignores the realities of the internet. Most negative reviews are posted for a reason, and usually it’s because the reviewer has a legitimate or perceived issue that they want addressed. You should always try to come up with a way to respond to a review…

… but always remember that there are some people who just want to watch the world burn.

If you look at the situation, and you and those you trust agree that the person is either off the deep end or being completely unreasonable, and if absolutely no good can come of a response, then let it go.

Another key is to avoid the impulse to tell “your side of the story.” Even if you somehow manage to avoid divulging client confidences, you’re simply inviting the author of the negative review to respond. The result is a longer comment thread (which search indexes will rank higher), two opposing viewpoints being published on the internet (we know how often this ends well!), and any success you might have had in “managing” the negative review gone.

From there, your response will likely be based on whether you’re choosing to respond to the review or the reviewer.

a) Respond to the Negative Review

This response involves you showing some level of empathy for the author of the negative review, particularly their circumstances, but is essentially written for people who see the review. If you’ve already tried to resolve the issue, and know that further contact with the author of the negative review won’t solve any issues, this is the type of response you’re looking for. Apologize, share some empathy with the author’s situation, and that’s it!

b) Respond to the Negative Reviewer

In the event that your response can actually do some good not only to you but to the author, let the author know you’ve heard them. Let them know that you understand they’re upset, and that you’re interested in taking the matter offline. While this probably won’t happen too often, just imagine if you can turn your harshest critic into your strongest supporter.

It’s likely that you won’t see this particular opportunity unless you take the time to consider the merits of the negative review. As lawyers, we’re often willfully blind to our shortcomings. Being open to criticism by evaluating the merits of a negative review can give you insights into your service unavailable through other means. When you’re open to this kind of evaluation, I’m confident that you’ll start seeing more of your negative reviews as opportunities to repair the relationship, rather than merely damage to your online reputation.

3) Request that Particularly Damaging Negative Reviews Be Taken Down

a) Request that the author remove the negative review

First, you can ask that the author of the negative review take it down. Sure, not very likely, you’re thinking right now. However, never underestimate the power of anger – it’s a really strong motivator, but it’s a really bad one too. We do a lot of things we regret when we’re angry, and your clients are no different. It’s possible that after cooling off, or after you’ve been able to take the discussion offline, they’ve realized their negative review was inappropriate.

If so, great! Because they’re much more likely to be able to get the review taken down than you are, because your only other option (short of a lawsuit) is…

If it’s false/defamatory/incredibly profane, you might just have success getting the site where the negative review was posted to remove it. However, some essentially require you to prove that the post rises to the level of defamation, which absent specific factual assertions, is a difficult bar. Remember: opinions are protected speech!

However, even if it’s unlikely, if you’re at the point that you feel you need the negative review taken down, it’s always worth a shot!

4) If the Negative Review Is THAT Damaging, and Other Attempts Fail, You Can Sue…

Some sites won’t take down a negative review unless you present a court order to have it taken down. That means filing suit against your (probably) former client. The one who already demonstrated no qualms with posting the negative review you’re so desperate to remove. Not only will your litigation bring attention to the original negative review, the lawsuit is a pretty big invitation to the author to expound on the original post.

(Note: This section assumes the negative review wasn’t written by an anonymous source, or fraudulently posted as “offensive reputation management” by a competitor, which each have their own unique sets of problems.)

However, if you’ve suffered actual damages, it’s not unheard of for these lawsuits to be successful. But it is pretty rare. Consider your chances of success, balanced against the additional exposure your lawsuit will bring to the original post.

6) Maintain a Balanced Approach to Your Online Reputation

One negative review, even if its scathing, will only have minimal impact if it’s just one small component of your online presence. Set up a process for your clients to post positive reviews of your service to multiple sites, and make sure it’s easy for them to do so. Make sure that you’ve claimed your listing on all of the review sites like Avvo, Yelp, and Google+. Create content on your law firm’s website – the more posts you publish, the more Google and Yahoo will have to index when someone searches for your firm, and the less likely that negative review appears at the top.

One major caveat: I strongly recommend that you avoid “reputation management services” to handle your law firm’s online PR. While it might help to have a third party monitoring your online reputation, you need to remember that you have an ethical obligation to make sure the third party is acting ethically. Oh, and ethically by your standards, not theirs. If you do hire one of these services, make sure they have experience with law firms and understand (and agree to be bound by) your ethical obligations.

7) Get On With Your Life

Once you’ve done what you can, what else is there? Yep, it’s time to move on with your life. Some people will be unhappy with your service, and a few of them might choose to exercise their right to describe their displeasure online. You can try to help, but at the end of the day, it’s one person’s opinion, and once you’ve learned what you can from it, thinking about it any more is a waste of your time.