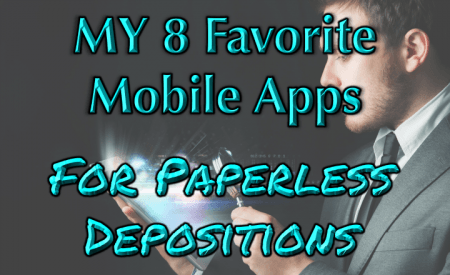 So what do I bring with me to a deposition?

8 Deposition Apps for the Mobile Lawyer:

I used to take most of my deposition notes directly on my deposition outline. My preferred tool was iAnnotate PDF, which has some amazing annotation tools. However, nothing in my experience serves a deposition’s note-taking needs better than Microsoft OneNote.

I am able to open an entire notebook for each deposition. Then, on the first tab, I paste my deposition outline (which includes images of each exhibit I want to introduce, and where in the deposition). During the deposition, I’m able to add notes in different colors right next to the questions. The second tab gets questions that I want to ask as they pop into my head, but aren’t appropriate for that moment. The third gets my general observations during the deposition.

Once the depo ends, I export the notebook into PDF format to save in the Notes section of my law practice management system (Clio) linked to the deponent. That way, I’ve got all my notes right with my questions and observations, all in one place.

There are times when typing out notes just doesn’t do the trick, and I haven’t yet mastered putting handwritten text into OneNote, so I rely on Notability. Which is fine, because when combined with an Apple Pencil, it’s freaking amazing.

Notability is as close as I’ve gotten to a true legal pad (my mission in life – or at least this blog!), particularly combined with the Apple Pencil. Everything I’ve heard says that my experience will only improve as I scale up to the largest version of the iPad Pro… which won’t happen for several years, unfortunately. I’m able to jot handwritten notes, and the app actually recognizes my hand and – almost all of the time – correctly picks which is supposed to do the writing.

Admittedly, I haven’t tried GoodNotes yet, which has a feature that Notability does not – the ability to search handwritten notes. Probably a game changer… once I actually have the cause to switch.

Other options: GoodNotes; Notes Plus

I realize that this isn’t about trials, but one thing I’ve learned since being converted from one of TrialPad’s biggest critics is that this app has a LOT of uses.

But, in reality, it shouldn’t be all that surprising that TrialPad would be good for depositions, is it? Just like a trial, you need to organize your potential exhibits, which may or may not be entered in the order you initially planned. Just like trial, your exhibits are going to need stickers and numbers that can be saved. Just like trial, if the witness annotates the exhibit, those annotations need to be saved.

All of these things are accomplished remarkably well with TrialPad. While Agile Law and Lexcity have some really cool features designed specifically for depositions, I find myself resisting for two reasons. First, I need to justify the purchase of TrialPad, so keeping it only to be used at trial, which are occurring with decreasing frequency, isn’t practical. Second, I’ve already paid for TrialPad, paying for services from Agile Law and Lexcity to do largely the same thing? No thanks.

One thing I’ve learned about depositions is that there are still a LOT of attorneys out there who love paper. I mean LOVE. Either that or they just can’t be bothered to switch.

Or they know how much I hate paper exhibits, and only use them to irritate me. You decide.

However, one thing I have had need of at every single deposition I’ve attended in recent memory is a mobile scanner. While nothing on a mobile device is going to effectively scan anything over 20-25 pages right now, most exhibits are 1-3 pages in my cases. All I need is a good mobile scanner. Scanner Pro 7 is the absolute best.

I have Scanner Pro set to begin taking a scan as soon as I open the app. It detects the document, lines up the document’s borders, and snaps a picture to digitize the image. While many of the scanning apps available offer edge recognition for documents, I haven’t found a single one that comes close to Scanner Pro. Once the image is recorded, Scanner Pro automatically OCRs the document, and it’s as accurate as any OCR I’ve used.

One thing I need to do is set up Workflows for my scans, as recommended by Jeff Richardson, which would really speed up the process.

You may not need to access other deposition transcripts while in a deposition. I actually never even considered the possibility… until the one time I needed them and didn’t have them anywhere. Strangely, opposing counsel mysteriously didn’t have a copy available either… in HIS OWN OFFICE. Anyway, my fault for not being prepared.

Never again, though. Now, every deposition in the case is highlighted and annotated as soon as I get it. Using TranscriptPad, I’m able to organize my transcripts and related exhibits (another handy feature in a case with a large number of deposition exhibits, I might add!), review them, make any highlights or notes I might need, which are available to me whenever I need them. While I would REALLY like it if TranscriptPad would link appropriate references to the actual exhibits (Ian, we’ve discussed this!), one feature that I find particularly useful in depositions keeps me coming back.

TranscriptPad offers a tool called Issue Codes. When you highlight a portion of a transcript, you can give it a special issue code to label important parts of testimony. For example, I generally use “Pertinent Facts,” “Contradictions,” and “Damages” as codes in every case, but each case usually also gets unique codes. In one case, a witness regularly discussed his interaction with my client and with the plaintiff. Each time he discussed my client, it was assigned one issue code, and the plaintiff got another.

I ran a report of the issue codes prior to the plaintiff’s deposition, and prior to my client’s deposition, and had every single reference to each mention listed, with page and line number references, just in case I needed them. It’s quite handy, I assure you.

Other options: DepoView for iPad (iOS)

Video depositions are no longer a thing of the future. They’re here, and we need a tool to take advantage.

Unfortunately, it seems as though much of the live-streaming technology hasn’t really kept up with the advancement of other technologies. Either that, or Comcast (or whomever provides your internet service) really sucks. Regardless, we’ve not seen the explosion in live-streaming video (and, more importantly, high-definition live-streaming video) that we expected.

However, there are still several companies who are vying for your business in conducting video depositions. Despite my qualms with some of their transmission quality, GoToMeeting remains my (dear lord, I’ve tried but I can’t avoid the pun) go-to option. Why? No other freely accessible program has anywhere near the same capabilities for sharing and discussing exhibits. I truly think that Skype and FaceTime offer better quality video, but neither offer the depth of features that GoToMeeting has for documents.

Other tools, such as Live Deposition, are great if you’re subscribing to their service. And many court reporting services also have apps that you can access for free if they’re the stenographer for the deposition. Hopefully the options will improve in the near future.

You’ve got exhibits, there’s no doubt. If your case involves an incorporated entity in any way, it’s possible that those exhibits are going to have page counts in the dozens, hundreds, or thousands. It’s not trial, so you’re not concerned about burying the jury in documents. No, it’s a discovery deposition, so you’re going to introduce as many as possible. So how do you get a copy to all the other parties’ attorneys?

My preference is to share a link with Dropbox. First, it uses a system that pretty much everyone is familiar with and trusts. Second, Dropbox makes it incredibly easy to share documents through a link. Third, Dropbox’s business version allows me to set a limit on how long the link to those exhibits remains posted – meaning I don’t need to keep 400 MB of architectural drawings in my Dropbox folder forever.

The only thing that can bring you down? Terrible WiFi in opposing counsel’s office.

Thanks to the cloud, I don’t go anywhere without my case information. When I first started practicing law (seriously, it’s only been nine years, so a lot’s happened!), I would bring the entire case file with me (if at all practical) to the deposition. It wasn’t uncommon for me to need access to the case pleadings (particularly the notice of deposition), or correspondence to verify information about the deposition that was supposed to take place.

Actually, now that I think about it, most of the reasons I needed something from the file was to answer a demanding question from opposing counsel completely unrelated to the deposition. But it was no big deal – provided I had the case file.

Fortunately, with my case management app on my iPad (Clio in my situation), everything I need in the case is immediately available. Contact information, correspondence, case documents, upcoming events, everything. Which is good, because let’s face it, there’s no deposition – EVER – in which you only discuss that particular deposition.

Other options: Depends, who do you use for case management?