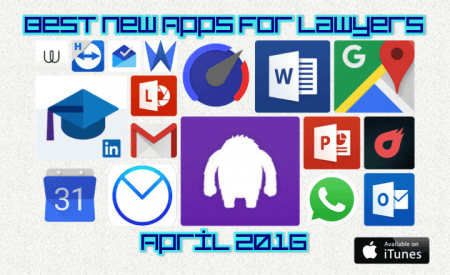 Whew! Wow, how was your April? Mine was pretty damn busy! Then, as I go looking through my sources for the best new apps this month, I have to say I found an embarrassment of riches. While this was a particularly strong month for solid updates to existing platforms, there’s still plenty of new stuff too.

Here are the best new apps for lawyers released or updated in April 2016:

Multi-platform apps begin at the (1:02) mark of the podcast.

The flagship email platform of Microsoft, I not too long ago declared that Outlook was the winner of my review of the best overall email apps for mobile devices. Even then, Microsoft has been aggressive at pushing updates, making it even better. This update is no different.

Ever since Microsoft purchased the Sunrise Calendar app in 2014, many wondered when the integrations that are a favorite feature on Sunrise would start to make their way to the Outlook app. Wait no longer, as this month Microsoft announced integration with Evernote, Wunderlist, and Facebook.

Users of those platforms can now expect reminders in Evernote and Wunderlist to appear in your Outlook calendar, complete with a link to the native reminder. Facebook now links your birthday reminders right into your calendar. Additionally, Android Wear users now join Apple Watch users in being able to operate their Outlook – Dick Tracy style.

The big news in April among security enthusiasts was the announcement that WhatsApp, the ephemeral messaging service purchased by Facebook, was now 100% end-to-end encrypted. Although not the first to that particular finish line (apps like Signal have had E2E for a long time), it’s definitely the biggest, with over 1 billion worldwide users.

Oh yeah, and it came about a month after a WhatsApp executive had been temporarily jailed in Brazil for refusing to decrypt messages for the Brazilian government. Let the Crypto Wars resume!

So, the “Front Page of the Internet” finally got its own app! Yeah, that’s been the collective response to the news that Reddit has finally released its own app to access the popular site. While there have been third-party options available for years – one actually purchased by Reddit – it’s nice to see them get into the game.

It’s also nice to see an app maker that already has over 240 million unique monthly views looking for new users. The app is designed specifically for people who haven’t used Reddit before. Focused on ease of use, you’re able to quickly post, comment, and up- or down-vote the articles online. If you’ve not tried out Reddit recently, check this one out.

Microsoft’s free scanner app OfficeLens received some significant updates last month. Users on any platform now have access to the ability to rotate photos right from their device. If you’ve ever had to take a picture of a document, then tried to view it only to realize it’s not oriented the right way, you’ll understand how useful this is.

iOS users of Office Lens now have the ability to batch scan documents – meaning scanning multiple photos as one scan – an incredibly useful feature. Android users get a really cool update: Handwriting OCR. That’s right, you can now take a photo of a handwritten document or white board, upload it to OneNote, and it’s searchable. Just like regular text.

You may not have heard of Wire, but the minimalist messaging platform, designed by several programmers from Skype, actually beat WhatsApp to the end-to-end encryption milestone… last month!

Yep, we’re not even talking about that feature here. No, the big deal that Wire announced this month is that they’re now able to extend their end-to-end encryption to file sharing, as well. Previously, you could share photos, but now you’re able to share any file extensions with up to 128 participants. If you’re not interested in setting up a secure client portal, or need to exchange documents with your clients while on-the-go, Wire could provide the security and confidentiality you and your clients need!

Microsoft’s famous Windows Phone keyboard has finally made its way over to iOS. I’ve been quite interested in this since it was announced a few months ago, and I have to admit, it doesn’t disappoint. Sure, its got most of the things you’re used to, including predictive text that learns your patterns (although it takes some getting used to).

But the killer feature is the “one hand” mode. You’re able to arc the keyboard on the left or right side to make it easier to enter text with just one hand (while reducing the likelihood that you’ll drop your phone). While it’s not great for my iPhone 5s – the arc results in buttons that are just too small and close together – I can see this being really nice on larger phones.

Now all they need to do is add emoji support, and it’ll really be amazing.

The concept of Mindfulness has been pretty popular lately, but I do like apps that are promoting the concept of being more aware, without using the word “Mindfulness.” Workfit is one of those apps.

Using metrics that track your attention at meetings, your responsiveness to emails from co-workers (and their responsiveness to you), and your time-to-complete various tasks, Workfit is designed to help boost your productivity and feel better about your performance in the office. For those of you looking for just a little coaching in this area, an app like this could definitely be nice.

If you use OneNote as your note taking app, you’ll be pleased to know that Microsoft has added some cool features to the mobile version this past month. First, you’re now able to directly embed videos right into your OneNote notebooks from several popular online video services, such as YouTube, Sway, Daily Motion and TED.

Another update is for iPad users, who are now able to rearrange auto recordings, images, text, shapes, and any other items within a notebook by touching and dragging the item. Having just spent a bunch of time doing this, trust me – it’s a nice upgrade.

The updates from Google this month can pretty much be categorized as “quality” upgrades. They’re not as voluminous as some others, but they definitely make up for it in how important the individual upgrades are.

This month, Google updated Calendar for Android with Smart Suggestions for event titles, places and people. Basically, based on the type of event you create, Google will actually suggest a name, potential locations, and recommend the contacts you might want to invite. Since shaving a few seconds off of small tasks like this is really what improves your productivity, this is a significant update.

I’ll be honest, I’m not exactly sure what to think about this app. Basically, it allows you to remote-desktop into your Android device from a different computer. You’re able to mirror the screens, download or delete apps, modify the settings, even change the WiFi – all remotely.

It’s all done through a 256 bit AES encrypted tunnel, so your information should be secure. In my mind, the best use of this will be for when you accidentally forget your tablet at the office. However, if your law firm uses a tablet for clients to fill out intake information and the like, this could potentially be an effective – and low cost – security tool.

Finally this month, it’s Gmail. As I mentioned before, Google has gone for the limited-but-important route this month for their updates, and Gmail might actually be the best example.