In my most recent edition of the Best New Apps for Lawyers, I discussed the most recent email offering from Google – Inbox by Gmail.  Some speculate that this app may eventually become the preferred email client for Google, replacing the iconic Gmail system.  While that particular decision is still a long way off, Inbox already offers several tools that lawyers may find useful.

The tech guys at Gizmodo offered 7 Tips to Unlock the Potential of Google Inbox, which I have updated to more specifically outline the benefits that lawyers can derive.  So here are 7 Ways Google Inbox Can Boost Your Firm’s Productivity:

Let’s be honest, some emails just arrive at the wrong time.  If you’re like me, the best time for you to respond to an email is immediately after it pops up.  My next option is to leave it unread, which might not be acceptable, but at least the email stays highlighted.  Admittedly, it’s not the best system.  Inbox addresses both of those issues by allowing you to have the email pop back up after a designated period of time – be it 10 minutes, 12 hours, or the next day. 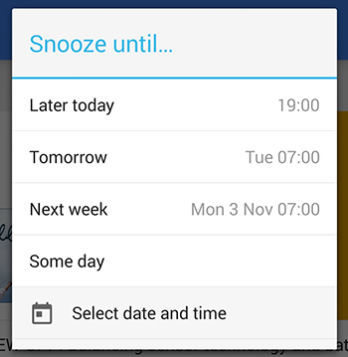 Basically, Inbox archives the email (so it is still accessible at any point in time), but pops back up in your Inbox as indicated.  Have a hearing coming up, but want to make sure that you address three of your incoming emails at lunch? Set them to appear at 1:00. Need to respond to your client’s most recent screed, but need a few minutes to cool off? Snooze it for an hour. That request for you to teach a CLE in six months? That one can be saved for tomorrow!

2) Pin Emails to save them for later.

This is similar, but not identical, to snoozing. Say you have a big list of emails to get through, and there are a couple that you need to designate as high-priority. But you REALLY need to make sure that you get through at least scanning the emails. Just pin the important emails, and they’ll be collected for you right in your inbox.  As the Gizmodo article says: “[a]pply a pin when you’ve got a message that you don’t want to lose in the deluge of other emails.”

Essentially, this will work like a “Star” or “Follow-Up” flag in regular Gmail or Outlook. We all know these emails, too. The email from your boss containing all the important information for the mediation you’re attending; the email from your client responding to important questions; the email from your spouse with the detailed list of things you’re supposed to pick up on your way home!  None of these items can be ignored, so it’s incredibly helpful to have them all in one place.

3) Use the Low Priority Label for less important emails.

So I can’t help but think of those incessant CLE emails when I see this one.  You all know the ones I’m talking about – emails offering deals for CLE courses that you’ll never take, in practice areas you didn’t know existed.  When that happens, you’re able to collect all the emails offering low, low prices for the class teaching feline personal injury law into a bundle, clearly identified as “low priority.” 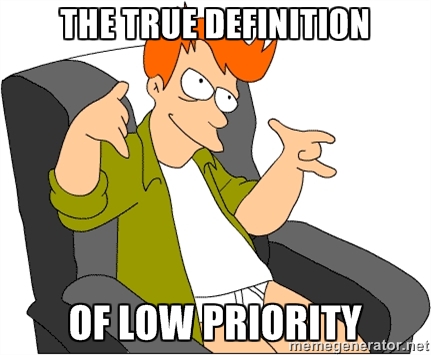 Inbox offers several potential ways to deal with these “low priority” items.  First, you can have them sorted as “low priority” right there in your inbox.  You’re also able to create an entirely new tab, similar to the “social” and “promotion” tabs in Gmail.  Even within a separate tab, Inbox can sort and filter your emails, creating a tiered system of “low priority” emails, ensuring that you ignore those completely pointless emails for as long as humanly possible!

4) Create basic reminders for yourself.

A feature of Google Now, the new Reminders system has been included in Google Inbox.  It is notable that this system is NOT a full-fledged to-do list (like the ones I’ve spoken of so fondly in the past), but rather a basic reminder system appearing at the top of your inbox. 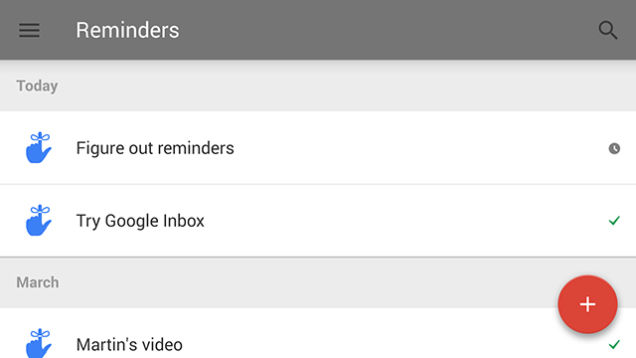 As detailed in the Gizmodo article, this feature does not appear to be “ready for prime time.” Specifically, there is not yet any ability to link a reminder to a specific date or time, or even a location (as you can in Google Now).  However, there is hope that the feature will be improved over time.  There are also some issues with the cross-compatibility with Google Now.

However, given the location of the reminders section, this feature could be ideal for attorneys who want to make sure to record quick reminders without leaving the inbox.  Moreover, I can’t think of a place I look more frequently during the day than my email, so putting a few basic reminders at the top guarantees that I’ll see them many times over the course of the day.

5) Mark categories as “Done” to quickly archive groups of emails.

Ah, the elusive “Inbox Zero.” It’s been quite a while since I even entertained the notion of reaching zero emails.  Mostly, it’s because the emails that build up while I’m going through old emails turns the ordeal into a Sisyphean endeavor.

While Inbox may not solve ALL of those problems, one tool that helps you deal with some of the clutter is the “Mark as Done” feature.  The “Done” button appears on pretty much every screen in Inbox – at the top of your inbox, at the top of your tabs, next to your bundled emails, and next to your unsorted emails.  At any point, you click on the “Done” button and the emails are immediately archived.

Notice I didn’t say “deleted.”  Key for attorneys is making sure we have a way to undo our own haste sometimes.  Emails marked as “Done” are merely put into the archive, and can be brought back to your inbox just like they can in Gmail.  Moreover, the emails are still searchable, meaning they can still be grouped together with similar emails.

If you use Gmail, you’re probably familiar with the three tab system currently in place.  One of the things that I’ve been most frustrated by, though, is the inability to expand on those three big categories.  Enter Inbox’s “bundles.”  Just move an email into a bundle, and you will be asked to sort all similar emails this way in the future.  While you probably need to be vigilant about how broad Inbox interprets “similar emails,” it’s an incredibly helpful function.

Even better, you’re actually able to set up a digest mode for these bundles, whereby Inbox will only show them to you once per day, week, or whatever time frame you set them for.  Again, I’m thinking of those wonderful CLE emails.  You know the feeling – you’re waiting on crucial information, and the three notifications that you’ve gotten are all for how to contest property seizure in 1860’s Texas.  Now, you can have all those emails presented in a digest format at a pre-set time (probably when my “delete” finger is at its most rested).

7) Use the updated search for a “smarter” inbox search.

Google has done an amazing job of creating a search engine that predicts what you’re looking for before you’re done typing it (with a few notable epic fails).

Now, that search function has been brought into your email box.  Start typing “my next flight…” and a list of search results containing your flight itinerary and check in emails will appear in a card below the search box.  The intelligent search relies on keywords (although a complete listing could not be found), but builds an intelligent search based on the contents of your inbox.  The same search method can also be used to create reminders.  Given the archive capabilities, let’s not pretend that lawyers don’t NEED an intelligent search feature!

Google Inbox may end up being Gmail’s eventual replacement.  If that’s the case, there are a lot of features that lawyers will really like.  This list just scratches the surface, but if there are more, please add them to the comments!