This Is The Future of Courtroom Tech, and I Love It!

So I read this article yesterday from the ABA’s Law Technology Today about the future of courtroom tech, and I couldn’t help but be a little giddy. Trying to explain it to my girlfriend, my “nerd” was on full display. (Not that I really work too hard to conceal it, anyway… for my recent birthday I made her watch the entire original Star Wars trilogy. In my own defense, it WAS my birthday, and she’d never seen it.  I KNOW, right?)

This courtroom, located in Louisville, Kentucky, is the future of courtroom tech, and it is sweet!

As a brief introduction, this courtroom was set up based on finding a single solution to two separate issues: 1) how can lawyers adapt their courtroom presentation skills, particularly those that involve demonstrative exhibits and other visual aids, to a generation used to rapid access to information, and 2) how can lawyers best take advantage of information gained in recent studies that actually indicate that people learn better when exposed to multiple visual inputs at one time. (Specifically, the study demonstrated a 14-15% improvement in test scores when students were exposed to multiple simultaneous presentations, rather than watching one single presentation, a finding generally unsurprising for anyone from the ADD Generation). 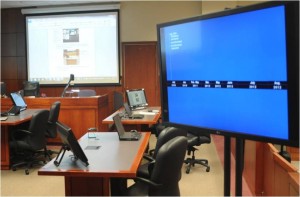 So what was that conclusion? A courtroom that has three independent video output devices, and an independent audio output device as well, for the attorneys to use during the presentation! Specifically, the courtroom is equipped with two large projection screens and a portable 55″ flat-panel monitor, all of which can be running independent content. As an example of how the technology can be used, imagine playing a video deposition on the portable monitor, directly in front of the jurors, so that they can see the witness and, if necessary (or required by the judge), follow along with the transcript subtitles.  On one of the projection monitors, you have a Timeline 3D presentation demonstrating a static timeline of the events that the witness is talking about, and on the other, you have a PDF file of the document that the witness is reading from and describing.  Oh, and there is even a touch screen-capable device to allow you to “tele-strate,” John Madden-style, as the court allows. The future of courtroom tech is already looking pretty awesome to me.

So how does it work? At each counsel table, there are four input spots (2 VGA, 2 HDMI), any two of which can be in use at the same time. Another pair of inputs (1 VGA, 1 HDMI) is available for support staff, allowing for a total of three inputs to be engaged at any one time. The logistics of the system are set up in an uncomplicated manner as well. The user selects which input will connect to which display, and even sets which display he wants to be able to mark up using the telestrator, all via the court’s iPad.

Well, what about the court record, you ask? The attorneys can select any one of the inputs to be recorded as part of the official court record, and the entire system is equipped to print the contents of any of the screens, should the attorneys wish to include their contents in the official record of the case. As discussed in the ABA article:

“A recent murder trial demonstrated the flexibility of the pilot system.  The prosecution used a document camera to display a diagram of the crime scene on one screen.  Photographs of the physical evidence identified on the diagram were shown on the second screen from a laptop.  The defense utilized the touch-screen technology with a witness illustrating the distances between pieces of evidence on the crime scene photographs.  The System allowed the diagrams and photographs displayed on the projection screens to be captured in the court ‘Record.’”

It’s an amazing setup. “But it sounds so complicated to use!” you may say. It’s actually designed so that an attorney only needs their laptop, and can operate the entire system without the assistance of any support staff. As a bonus, the court offers a training program for the courtroom setup good for 1 hour of CLE credit! (Do you think North Carolina will allow me to take the course for credit, even though it’s in Kentucky? The whole thing just sounds freaking awesome to me.)

Possibly even more amazing than the system itself is that installing the new technology, with an estimated cost of $50,000-$75,000 per courtroom, did not require any taxpayer money or a long slog through state government bureaucracy.  Nope, it’s all paid for by the local bar, which allowed considerably more direct input into the design of the system by local lawyers, and much more flexibility in adapting the system where needed. The entire project is being done by Jefferson Courtroom Upgrade Project LLC (“JCUP”), a non-profit company owned by the Louisville Bar Association, in conjunction with the local AV company Trinity Video Communications.  JCUP expects to have all nine courtrooms in the Jefferson Circuit Courthouse.

Ok, Mecklenburg County Bar Association, they’ve thrown down the gauntlet. If Kentucky can do it, so can we!

To see reviews of Presentation/Trial Practice software or mobile apps, or of display equipment, check out The Cyber Advocate’s Review Catalog!

Also, I’ve decided to include the parody John Madden commercial, just for fun.